The Wrucke Family’s Journey: In It Together 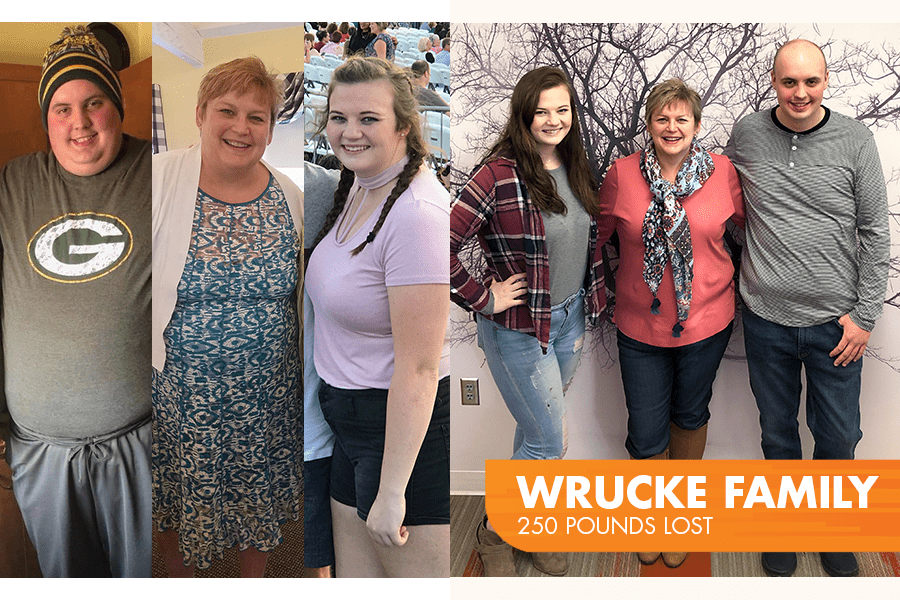 Pam Wrucke dreams of food … in a good way. She envisions a day when she is creating healthy meals for others with a healthy food truck. “I hope to make it a reality in the next three to five years,” she said. It was a dream sparked by healthy cooking methods she developed following the Profile Plan, from which she has lost almost 75 pounds.*

Pam has not done her weight loss journey alone. Both of her children are also Profile by Sanford members. Her son, Connor, has lost more than 130 pounds and her daughter, Christian, has lost 25 pounds.* “I support my mom in everything she does, so I told her that when she’s ready to do it, go for it,” said Connor.

The feeling is mutual. Pam first introduced Connor to the program after he was diagnosed with a blood clot last year. During additional bloodwork, doctors discovered he was borderline diabetic. Still, Connor was reluctant to sign up. “I was skeptical,” he said, having tried another program with no success. “I figured if it didn’t work, I’d just quit.”

But the program has worked for Connor. “He lost his first 25, and then 50 and every single week he lost,” Pam said. Those results were the motivation he needed to stick with it. “Mentally and physically it was a struggle,” he said, “But then I got on the scale every week and thought, ‘Ok, I can do this.’ If you can break through the mental block and stick with the plan, you’ll see the results I have.”

Support and Coaching are Vital to Success

Pam says they would not have had the success they did without their Certified Profile Coaches. “The coaches for us have really been key,” she said. “We can’t miss the coaching sessions. It’s just a must, it keeps us accountable.”

It has also made all the difference to have the support of family and be in it together. Christian, who lost her weight while attending college, will text pictures of food for ideas. Connor calls his mom and they’ll chat about their goals. Pam enjoys cooking and trying new recipes, which has also helped Connor. “Without my mom being able to guide me, I don’t know that I would have been able to stick with it like I have,” he said.

Since losing weight, Connor says work is easier, he has more energy and he’s not hungry all the time. “It’s like a weight has been lifted off of me,” he said. “I just feel better. My life is easier and simpler. And I’m more confident about myself.” Pam shared many of the same sentiments. There have been several moments when the realization that she was healthier hit her. “When I go to the amusement park now, I’m no longer the person to hold everyone’s purses,” she said. Last spring, she went on a cruise with Christian and got into a swimsuit to swim with dolphins. “I never would have done that before.”

Looking Towards a Healthy Future

Pam is thinking about her future. “My kids are at that age that someday they’ll get married and have kids and I want to be around for that,” she said. She is also thinking about her extended family. She has a father in his late 80s and an aunt who she helps. “I’m involved in a lot, I like to be the fun mom, I like to be active and I’ve got to be around to do these things.”

She reflects on the moment when Connor agreed to sign up and change his life. The success of both her children is astounding. “It’s just amazing,” she said. “I’m a very proud mom.”

The Wrucke family’s journey is a testament to the fact that a mother’s love can go a long way when the going gets tough. The support of family, when paired with an individualized nutrition plan and the added support of certified health coach, may be just the perfect formula for you to finally reach your goal weight and stay there! Click Here to set up your free one-on-one consultation with a Profile coach to discuss how Profile can help you make lastly lifestyle change like the Wrucke family.