See how Teen Mom Star Chelsea Houska lost weight & keeps it off. Learn more about Chelsea and how she is enjoying life after losing weight with Profile.

It’s a little nerve-wracking to see yourself on TV, especially when it’s on a regular show with a loyal legion of fans.

That was something 26-year-old Chelsea Houska of South Dakota faced when she agreed to be part of MTV’s Teen Mom 2 almost a decade ago.

The reality TV show chronicles the lives of young women as they navigate motherhood. Chelsea Houska, now Chelsea Houska DeBoer, appeared on the show when she was pregnant with her first daughter.

“I had my daughter very young, and I felt fine,” Chelsea said, but it was when she was pregnant with her second child that she realized she needed to change some unhealthy habits in her life.

“I wasn’t caring about what I ate or trying to eat healthily, and I ended up gaining a lot of weight, which resulted in me having a rough time toward the end of pregnancy,” the star said.

“After I gave birth, I just was not feeling great about where I was, and I wished I had taken better care of myself.” So following the birth, she began to look for diet plans that could work for her life.

While preparing for her wedding, Chelsea wondered what many of her friends were doing to look so good and healthy.

Chelsea soon learned that the other mamas were finding success on the Profile Plan and decided to check out the diet program for herself. She became a member, took the healthy eating plan in stride, and met faithfully with her health coach. The Chelsea Houska weight loss plan paid off, and she lost 50 pounds* in time for her wedding.

She was an instant fan of the program. “I was feeling great, had more energy than ever, and couldn’t have been happier,” she said. “I felt amazing in my wedding dress and proud that I had done that for myself.” 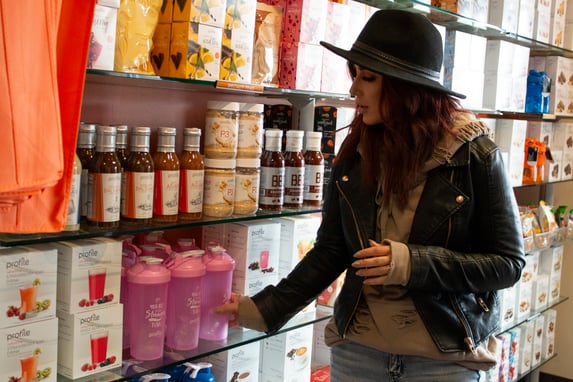 The program, Chelsea has shared, is straight-forward. “Once you get through the first couple weeks, it’s easy,” she said. She started cooking new things and found herself gravitating toward healthier choices in her home instead of junk food.

“Now it’s instilled in my choices,” she said. “It’s not like I choose a bowl of pasta now. I always choose the healthier option. It’s a habit.”

Working through a process that teaches healthy eating and provides lifestyle changes helps people keep the weight off permanently, Chelsea said. “Having one-on-one coaching, if you want it, is a big thing,” she said. “It’s not just the weight loss; it’s going through the stages and keeping it off.”

Chelsea Houska weight loss journey has led her to make continued healthy choices in her life. “It has been so easy for me to stick with. After doing the program, the habits have stuck with me. That’s just how I eat now.”

Chelsea Houska reveals how she maintained a healthy weight while pregnant

Chelsea utilized Profile’s MOM Program when she was pregnant the third time. She would meet regularly with a MOM-certified coach and followed a customized meal plan that ensured she was getting the proper nutrition to stay healthy.

“I felt amazing during my third pregnancy,” Chelsea said. “I was healthy, and it was just an enjoyable experience.”

The program kept her accountable and feeling healthy during her journey.

“My doctor was so happy I was doing it,” she said. Knowing that she would have two children under the age of two following the birth of her baby, the young mama wanted to feel good and have more energy.

“It’s affected the way I feel about myself. Being on Profile affects my mood. If I want to go out and do things – I just feel good.”

Now that she is expecting her fourth baby, she is once again following her MOM meal plan.

“I am so glad I have that meal plan and Profile products to keep me in check. It’s been going really great.” Chelsea said.

Chelsea is looking forward to the future and being a more healthy mama to four young kids. “After I have the baby and I’m ready to get back to my pre-baby weight, I will definitely be doing coaching because I feel like it really keeps you in check,” she said.

After three years with Profile, Chelsea knows what products she loves and has some go-to favorites in the house that help her stay healthy.

“I have a Chocolate Brownie shake every morning mixed with coffee. It’s so good!” Her ultimate favorite product, though, is the wafer bars. And her husband, Cole Deboer, is also a fan. “They are definitely my top favorite. They are so good that my husband steals them.”

Another favorite is the pizza crust. “I like to do a buffalo chicken pizza. I cook some chicken in a crock-pot with Frank’s hot sauce and a packet of Ranch seasoning. Top the Profile crust with it and toppings of choice. So good!” 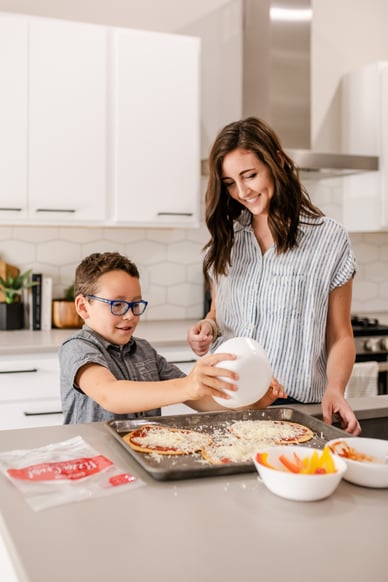 Other Profile recipes Chelsea loves are Thai lettuce wraps, egg roll in a bowl, and the big mac salad.

The thing Chelsea loves is how adaptable the healthy eating tips are to her everyday life. She finds she can modify just about any meal with healthy food swaps.

“I try to cook healthy for the whole family, but even if I decide to do something like spaghetti, I’ll save a side of the meat and sauce and have it with zucchini noodles. I have found there is always a way to incorporate healthy eating with almost anything,” she said.

When Chelsea started filming the ninth season of Teen Mom 2, the South Dakota native still wanted to look and feel her best for herself, her children, and her fans. She had grown comfortable with being in front of the camera and photos.

Fans and followers had an overwhelming response to the Chelsea Houska weight loss. They wanted to know what she was doing. “Everyone was shocked at how well and fast it worked,” she said.

For the fans who watch her on the show, follow her on social media and see her as a role model, her message is clear.

“I definitely don’t want to come across as ‘you had a baby, you need to lose weight,’” she said. “This is an option for people. It’s making healthy choices. It’s a lifestyle change, and it’s something I’m proud to be a part of,” she said.

Chelsea Houska shares her story with others

As a reality TV star with a lot of fans and a large social media following, Chelsea had to decide whether she would share her Profile journey once the plan started working in her life. She is so happy she decided to share her success with her fans.

“I remember seeing celebrities and other women and thinking, ‘How are they losing weight so fast?’ I feel like no one would ever talk about it. So, I wanted to be open with what I’m doing in case it would help someone else.” she said.

She continued to say, “If a woman is confident with how they are, I am obsessed with that. But if they’re not feeling like their best self and want to lose weight, I love sharing what was helpful for me. And now I get messages from women saying, ‘I lost 30lbs!’ and they’re just so proud of themselves and thankful to me for sharing. That feels so good.” 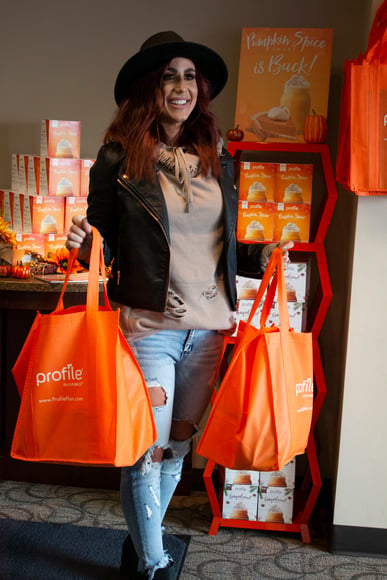 Every woman’s journey to motherhood is an exciting and unique time in her life.

If you are a fan of Chelsea Houska and would like to learn more about the star’s success, check out our MOM program. The Profile MOM program is the most comprehensive program with unmatched support and education for a healthy pregnancy.

Interested in finding a custom plan that fits into your life? Join now!

Please enter your zip code to customize your experience.