You are using an unsupported browser, so some of the features and functionalities of the site might not work as expected. Please update your browser to improve your website experience.
Home > Blog > Success Stories > Thanks to Profile, Brie is More Confident Than Ever!

Thanks to Profile, Brie is More Confident Than Ever!

After a year on Profile Plan, Brie has lost over 80 pounds and has dropped 78 inches, causing her to drop from a size 24 in pants to a size 14.

Brie Otts never would have thought a mirror in a public restroom could send such a powerful message, but it did. The message? “Oh my! Is that what I look like!?!”

Brie admits to being overweight her whole life with weight gain worsening year after year: “I didn’t really know it had gotten that bad.” She added,

“You see yourself every day, and you kind of know what you look like, but I walked into that public restroom, caught a glimpse of myself, and was shocked. That was the moment I decided to do a weight-loss program.”

Brie’s doctor diagnosed her with pre-diabetes in 2020 and cautioned her about the number of carbs she was consuming stating, “You have to do something now.” With this diagnosis, she knew to start something before Type 2 Diabetes became an issue.

Not only was diabetes a threat, but Brie also did not have much energy and her self-confidence was low, staying home most of the time:

“I was in the morbidly obese category; I didn't have any confidence. I wasn’t going out and living my life.”

Brie’s confidence continued to sag as she had reached a size 3X in tops and a size 28 in pants.

Though being overweight all her life, Brie had never joined a weight-loss program before, but she had heard about Profile through a reality television show. The person in the show had success on the plan, so Brie thought Profile would be worth a try. She called for a free consultation and joined. She set her weight-loss goal to 175 lbs. and never looked back.

Brie said that she “was not an eater and had no metabolism; it was non-existent”, so eating every two hours for the first three weeks was difficult for her. She was used to having “a Starbucks for breakfast and lunch and then having dinner, and that was it.” After the first week, though, her body adjusted to its new lifestyle. She never hesitated in her individualized plan because she was determined; it was what she had to do to get where she wanted to be. She wanted to reach that 175 lbs.!

In the first week of Profile, Brie lost 6 lbs. and never stopped losing: “As long as I am following the plan and eating what I’m supposed to eat, it’s continuing to go down.” Though she has chosen to eat off-plan on some occasions, her weight has not fluctuated:

“I’ve learned that I've been able to get right back on plan the next day. I have to live my life, and this has to be sustainable for me.”

She worked with her coach and stayed on her original plan to keep her weight loss steady. According to Brie, “I am a creature of habit.” Though there are a multitude of flavors for shakes, fiber drinks, and bars, she chooses only one of each and never strays: “I don’t need all those other flavors in my life; I’m just fine.” She sticks to her individualized plan and adds flare to her daily cold brew coffee by adding a Profile chocolate brownie shake: “It’s amazing! So good that I haven’t been to Starbucks in a year.”

Off-the-scale victories include dropping 78 inches causing her to drop from a size 3X to a large in tops and a size 24 to a 14 in pants. She has more energy to include a three-mile walk in her daily routine with plans of incorporating strength training in her exercise program. 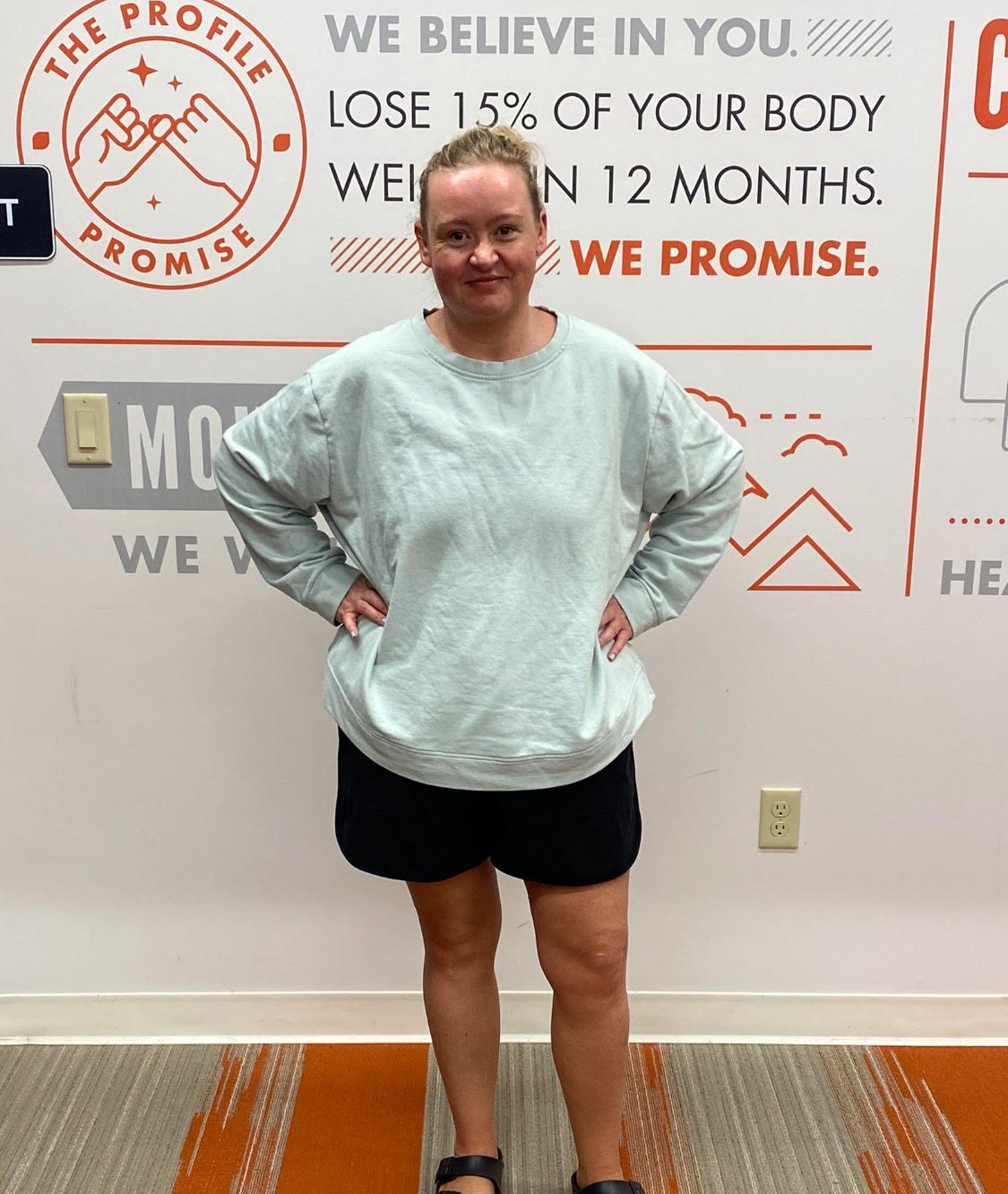 Profile... why it works for Brie

Brie says that Profile works for her “because it’s easy to follow; all the work is done for me.” Her 1-1 coach is a constant motivator by being there for accountability. They talk about life, what is working or not working, and any questions Brie may have about her program. Brie uses her coach as a deterrent to gaining weight:

“I know how to eat healthily; I know what I need to do. Coaching is 100% about accountability for me. I want to avoid explaining to anyone why I didn’t lose weight.”

Profile can change your life

Brie learned she had the “strength and the willpower to begin Profile and move forward.” If you’re considering Profile, Brie advises, “Do it, stick with the plan and it will work. It’ll change your life.”

“Profile has given me self-confidence. I can now look in a mirror and like what I see.”

Interested in finding a weight loss plan for yourself? Take our quick 2-minute quiz to get matched with a personalized plan tailored to your individual needs and health goals.

Jennifer’s Journey: So Much To Be Thankful For

Living as a Healthy Family: Dallas and Amelia’s Story